The Boy Who Biked the World

Tom really wants to be an explorer.  His favourite book is an atlas and he follows adventurers not footballers.  His schooldays are spent daydreaming about travelling from Tibet to Timbuktu.  A private wish blurted out loud started his freewheeling adventure:  I'm going to cycle round the world.  His classmates laughed.  No one believed him, least of all his teacher.  The mountains will be too high!  The desert is too hot!  Everyone shouted their reasons why his dream was impossible.  But it was a funny thing, the more that people told him he couldn't do it, the more Tom found himself wanting to prove them wrong. 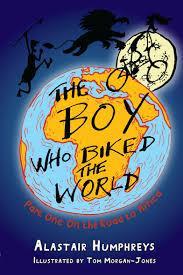