The Time-Travelling Cat and the Aztec Sacrifice

Topher Hope is distraught when Ka, his devoted cat, disappears, leaving a word on his computer: TENOCHT*I*TLaN.  Wasn't that the home of the blood thirsty Aztecs?  Then she must be in dreadful danger.  But when Topher travels back to the time of the Aztecs, he finds trouble from another source.  The Aztecs think Ka is one of their gods, but El Sol, a piratical Spanish conquistador, thinks she is a witch.  Can Topher save Ka from El Sol, rescue Pima, a girl the Aztecs want to sacrifice, and escape from the wondrous, floating city of Tenochtitlan before it is destroyed? 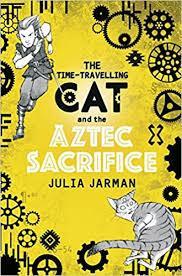